I have nearly a dozen TCDB trades in progress and I still haven't finished discussing the batch of cards from BaseballCardStore so I'm going to write one more post here and one more at The Collector before moving on.

My 1993 Leaf set is almost complete! After picking up Dave Hollins and replacing Pat Listach I just need the Ken Griffey Jr. card to complete set #2. Then it's on to Update, which is where the Tim Salmon card comes from. Salmon, Jim Edmonds, and J.T. Snow were hot rookies in 1993 and I was such a fan of their cards in large part due to the updated Angels uniform that debuted in '93. It's one reason why I really liked Mike Trout's 2011 Topps Update RC and would definitely want one even if it was valued at $1 instead of $1,000 or whatever. Perhaps the 1993 Angels rookies will be a subject for a future post here. 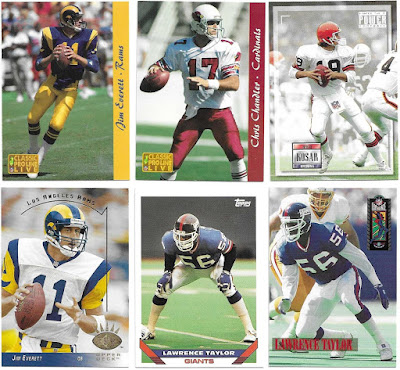 I decided against a separate post for all of my football finds from the dime store, but here are some from 1993 that were inspired by previous posts on this blog. The LT Classic is from 1994. 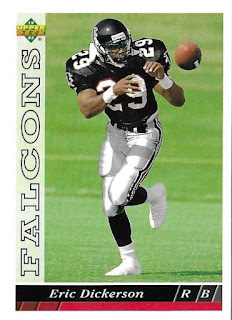 When I update my 1993 wantlist I plan to mix it up with base sets, small insert sets, and small checklists of players who retired that year. Eric Dickerson will be the first new addition to my list of "sunset" stars. More on him a little later..

The first TCDB trade I completed in February was my first with user Packsux. He's a Bears fan in Wisconsin and I really thought I'd traded with him before, but it turns out he never replied to my offer. This time we made a deal quickly and flawlessly. Well... quickly, at least.

I sent him 33 cards (mostly Topps flagship) in exchange for 30 older cards across six set builds. The highlights were these two 1993 Score Franchise inserts: 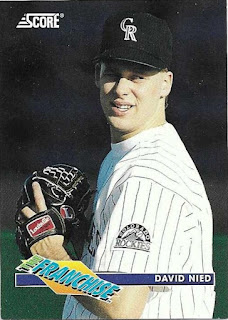 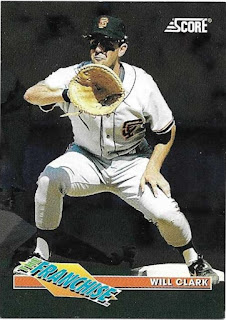 I'm now one card away from completing half of this 28-card set.

Going off-topic a bit, Mike mentioned that one card I requested had a "funky corner" - this 1987 Topps Wilber Marshall: 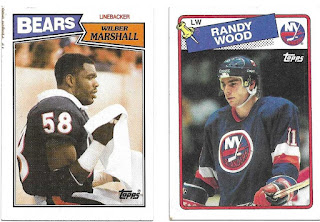 Yeah, it's not great - but I found two cards in our trade that were as bad, if not worse. This Randy Wood 1988-89 Topps single has some serious corner damage at the bottom (it's actually worse than it looks in the scan). Mike volunteered to send me the Marshall and some extra cards as compensation, which was appreciated:

I started a collection of team logo cards from 1999 Victory baseball (and football). So far I have the Indians.. and these two. They pair nicely with the Nied and Clark, don't you think?

He also threw in a Drew Robinson card I had on my wantlist. Who is Drew Robinson, you ask? I didn't know either until a couple weeks ago when we were snowed in and I read his story on ESPN.com. 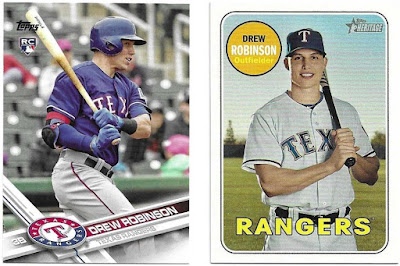 Haven't seen the e60 documentary yet but I plan to watch it soon. He's in camp with the Giants this spring and I'm rooting for him. Anyway, two checklist cards and an update single were fair compensation for one or two bum corners. But then I found this: 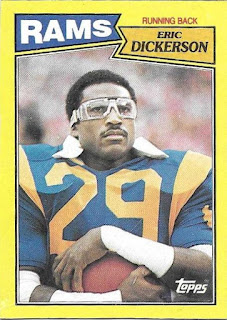 I requested this 1987 Topps box bottom card for my Eric Dickerson PC and as I piled up the cards to be scanned I admired it from a few feet away. What a cool card I thought to myself. Then I picked it up.
There's a big ol' crease along the bottom. You can see part of it underneath the 'Topps' in the bottom right corner. I should have known. Damn Bears fan punking a Packer backer. lol.
This might be my last post here for a while. It's tough maintaining two blogs; sometimes I have tons of ideas for one but not the other - and that's the case here. However when I return in mid-March (or sooner) I'll have an updated wantlist and a new topic: athletes (and entertainers?) who were Born In 1993.
Thanks for reading!