Houston sports teams are having a rough year already. The Astros are still public enemy #1 in baseball, James Harden and J.J. Watt couldn't get their teams to a championship and left town. George Springer did win a title in Houston, but left for Toronto anyway. Deshaun Watson wants out. It's a mess. But the city's sports scene in 2021 is a well-oiled machine compared to the 1993 Houston Oilers. 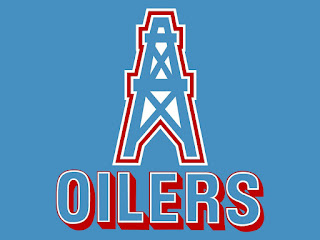 Do you remember the "Luv Ya Blue" Oilers of Earl Campbell and Bum Phillips? Or the "Run & Shoot" era with Warren Moon airing it out to Haywood Jeffires and Ernest Givins? I remember these Oilers - or I thought I did. They were an exciting team. Moon was fun to watch, and their powder blue uniforms were fantastic.

This past weekend UrinatingTree posted a documentary about the 1993 Oilers that is absolutely worth watching. There was enough drama in that one season for three or four documentaries. U-Tree tied it all together in a tidy 31 minutes and it's as fascinating and informative as any 30 for 30 episode.

I was a casual Oilers fan at the time, they were on my radar and I cheered for them against just about any AFC team except maybe the Dolphins. Their logo and wordmark were one of my favorites; I picked up Oilers memorabilia whenever I could including a collector's cup, a key chain, and this pennant: 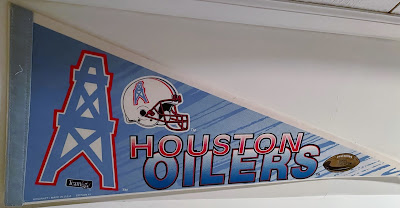 A few years earlier (1991 I think?) I managed to find a Warren Moon Starting Lineup figure. Almost bought a Drew Hill figure from a dealer named Jack who specialized in hard to find pieces, but I passed - it was either out of my price range, damaged, or both.
Anyway... back to the 1993 Oilers. While watching U-Tree's video I made a mental note to check my collection for cards of the principal players in this season-long drama.
I only have 23 Oilers cards from 1993. Ten of them (nine base cards and an insert) are from the SP set. So I put together a little wantlist here, which I'll refer to next time I shop at baseballcardstore.ca.

I only have 27 total Warren Moon cards so I could definitely expand this list beyond '93 issues.

I have seven Haywood Jeffires cards including some very cool 1991 issues. Don't really need any more at the moment.

Ernest Givins' 1992 Upper Deck card makes me dizzy. I liked Givins and his touchdown celebration but the Electric Slide song was awful. My high school Spanish teacher played it frequently and I couldn't stand it.

Gary Brown somehow rushed for 1,002 yards in 1993 despite getting just 195 carries in Houston's pass-happy offense. I have three of his 433(!) cards and wouldn't mind adding one or two more.

I have one David Williams card - 1992 Stadium Club. Wouldn't mind picking up another one from 1993. (I could also use more Mike Munchak and Bruce Matthews cards.)

Wilber Marshall's 1993 Topps card lists him as a "Franchise Player" -- for Washington. He signed with the Oilers that spring, then followed defensive coordinator Buddy Ryan to Arizona for 1994.

13 of my 16 Sean Jones cards picture him with the Packers. I could definitely use more Oilers issues of the team's sack leader in 1993.

Backup interior lineman Jeff Alm has just eight cards. This is the only one that pictures him in the powder blue Oilers uniform - aside from his 1990 Score Supplemental card that hides the logos so well it would blend in with an unlicensed set today.

Cris Dishman had 43 interceptions in his career and yet one quote about him has stuck with me since his playing days. I think it was Deion Sanders who said "Dish hadn't had a pick since God was three." I'm assuming I read that on the back of a football card but I can't find it anywhere.

Here's another case of my memory deleting some details. I will never forget this Antonio Freeman catch but if you gave me fifty guesses I never would have remembered that Dishman was covering him on the play.

Bubba McDowell was the guy I remembered but Marcus Robertson was the better safety. He led the Oilers in interceptions and earned All-Pro honors in '93. I don't have any of his cards, which might explain why I didn't realize how good he was.

I'm not sure if there are any other Oilers logo/helmet cards out there aside from this 1994 Pacific Prisms card but I might try to seek out some Panini stickers like this one or this one.
I've updated my 1993 wantlist but I might create a second page for players who started or ended their career that season. I'll probably move my Oilers wants there, too.
Thanks for reading!