I haven't been able to think of any 1993-themed topics or songs to add to the playlist here, so here's a short "show off" post with some more cards I recently acquired. 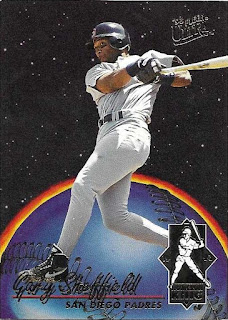 Here's the Gary Sheffield insert I tried to purchase from Sportlots. This one arrived in a trade with Justin, author of The Hopeful Chase blog. Justin collects Baltimore Orioles and Tampa Bay Lightning cards, so I assumed he must live somewhere in the Carolinas? Nope. He's from Utah.

Justin mentioned trying to trim down his collection and so I offered him 18 Orioles (including two serial numbered cards) plus 5 Lightning cards including a Steven Stamkos relic. In return I received nearly the entire set of 1993 Leaf Update: 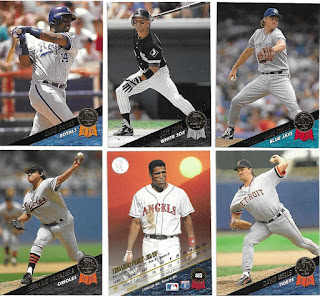 There aren't a lot of big names in the Update portion, though these two lefties should be familiar to most collectors. 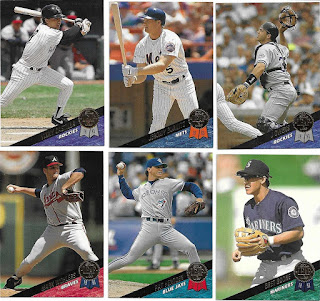 Every time I see J Owens cards I think of the blogger gal with a similar name. Haven't seen her around in a while, hope she's okay. I now have dupes of Castilla, Burnitz, and Boone because I picked up copies on baseballcardstore.ca. (I also have an extra Wohlers but that's going in my All-Time Teams binder.)

Not going to show off all 90 Update singles in this trade but I might scan every card in the set once I complete it. I've got four more to go, and curiously they're all Cubs:

If I don't receive any of these in the next few weeks I might head over to Cardbarrel and pick them up along with some 2013 Topps needs and a Jhoulys Chacin card to complete my All-Time Rockies page.

As promised in my Houston Oilers post I did pick up some singles from the online dime box. 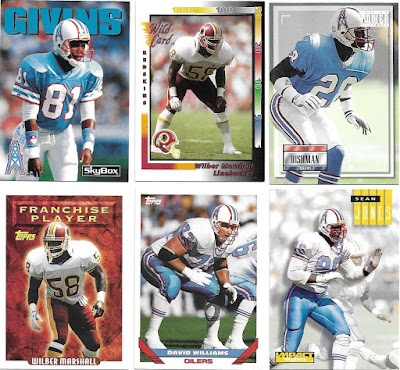 I might try to prioritize Oilers cards later this summer. Right now I'm just trying to clear out all of my surplus memorabilia and decide which sets to break up and sell on eBay.

If you have any early '90s Oilers or 1993 Leaf Update Cubs please let me know. I'm also taking suggestions for blog topics and playlist tracks if you have any '93-themed requests.