On this date 28 years ago Nikita Kucherov was born in Maykop, Russia. (or is it Maikop? that's how Upper Deck spells it.)

Eighteen years and one week later, the Tampa Bay Lightning drafted Kucherov in the second round of the 2011 draft. The left-shooting right wing made his NHL debut against the New York Rangers on November 25, 2013 - scoring a goal on his first shift.

In his second season Kucherov developed into a top two-way player for Tampa, finishing tied for second on the Bolts with 29 goals and leading the NHL in plus/minus with a +38 rating. He also played in the Stanley Cup Final for the first time. The 21 year-old winger finished one point behind co-leaders Tyler Johnson and Patrick Kane among all postseason scorers in 2015. Chicago won the Cup in six games.

Kucherov led the Lightning in scoring a season later, topping the team with 66 points in 2015-16. He notched his first 40-goal season in 2016-17, tying Toronto rookie Auston Matthews for second in the NHL. The Bolts were loaded with young stars at the time; all of their key players were 27 or younger. It was getting tougher to keep all their talented young stars under the salary cap. Hold that thought.

Nikita Kucherov was emerging as an elite NHL superstar. However the Lightning as a whole were headed in the wrong direction. Tampa missed the playoffs by a point (not Brayden) in 2017. A year later the Bolts blew a 3-2 lead in the Eastern Conference final, losing to the eventual Stanley Cup champion Capitals in seven games.

After a 100-point season in 2017-18 Nikita signed an eight-year extension with the Lightning. His next contract would kick in at the start of the 2019-20 season - at a cap hit of $9.5 million per season. With one more season under his old "bridge" deal, Kucherov rewarded the team's commitment with a season for the ages in 2018-19. 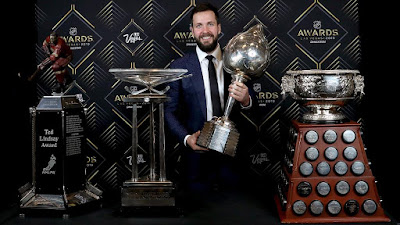 Two days after his 25th birthday Nikita Kucherov earned Hart trophy honors as NHL's MVP and the Ted Lindsay award as MVP selected by the players. He'd already earned the Art Ross trophy for leading the NHL in scoring with 128 points - the highest single-season total by any player since Mario Lemieux racked up 161 points in 1995-96.

128 points was also the total Tampa Bay had compiled as a team, running away with the league's best record at 62-14-4. Their regular season dominance didn't extend into the playoffs as the Columbus Blue Jackets swept the Bolts in a first-round shocker.

Another playoff loss led to increased talk about the Lightning re-setting their roster. The team had spent right up to the salary cap for years, extending young stars who were drafted and developed from within. It hadn't worked. Was it time to make a change?

GM Julien BriseBois didn't panic. He kept the roster largely intact, with Steven Stamkos as captain and Nikita Kucherov as the offensive star. On pace for his third consecutive 100-point season, Kucherov finished the pandemic-shortened 2019-20 season with 85 points in 68 games - the seventh-highest total in the NHL.

More importantly, he helped the team win the Stanley Cup, leading all postseason scorers with 34 points. 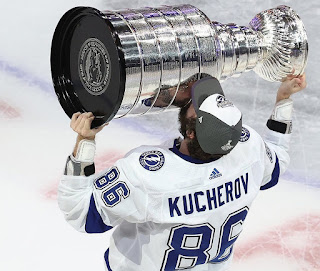 This season Nikita Kucherov has been in the news for not playing. Tampa's superstar underwent surgery to repair a hip injury he suffered in training camp. As a result he missed the entire regular season. That's where things got interesting. BriseBois was able to put Kucherov - and his $9.5 million contract - on long-term injury reserve, allowing the team to clear cap space for other players.

No problem, right? Except... Kucherov had been skating with the team during the regular season. And once the playoffs start the salary cap no longer applies. The Lightning activated Nikita immediately. Was this cap circumvention? Perhaps, but it wasn't illegal. 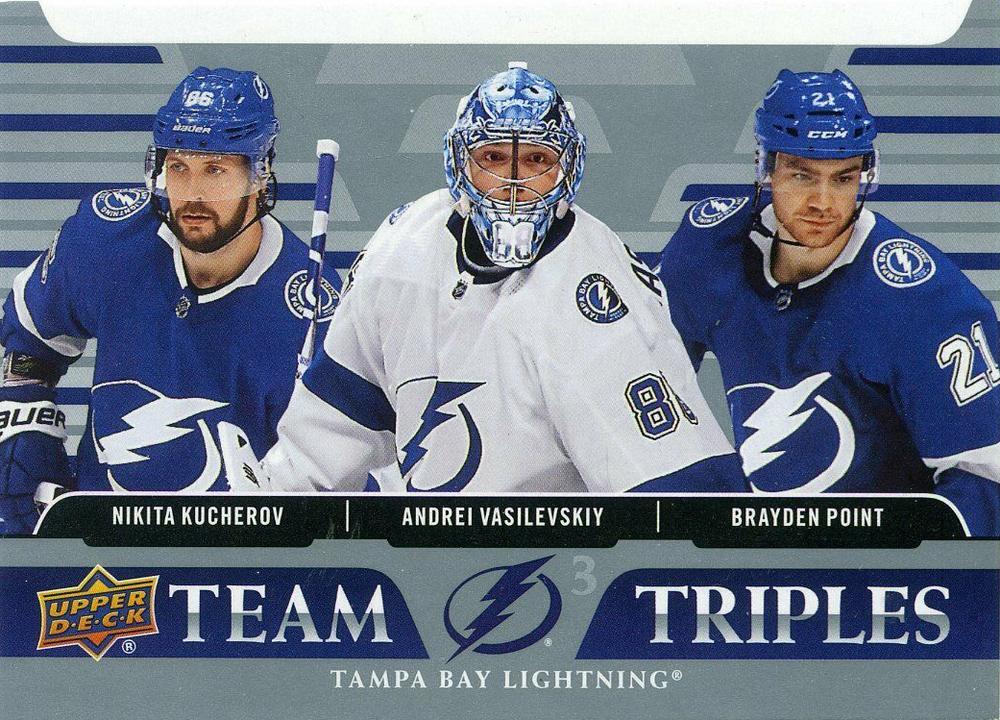 Tampa's title defense continues against the New York Islanders tonight. While much of the discussion swirls around Nikita Kucherov's contract it should be noted that the superstar winger has been one of the top five players in the NHL since 2017. In the four seasons before his hip injury, Kucherov averaged 99.5 points per campaign - a level of production matched only by the Oilers' Connor McDavid.

No NHL player born in 1993 has compiled more career points than Nikita's 547 - a total that also tops his draft class.

You can still find Nikita Kucherov cards in dime boxes - including the online dime box, where I've picked up a few (one more is on the way as I type this.) And his 2013-14 Panini Prizm RC is a bargain compared to Prizm rookie cards of the 2019 NFL and NBA Most Valuable Players.