I haven't written anything here in a while. Haven't had much to say about 1993, sports, or trading cards. Lately I've been reading about 1990s alternative and binge-listening to The Ringer's Rob Harvilla's weekly podcast 60 Songs That Explain the '90s. I highly recommend it if you're a '90s fan.

"Fade Into You" by Mazzy Star hasn't come up yet. I don't think it will. But if I listed my top 60 essential tracks of the decade it would definitely make the list. 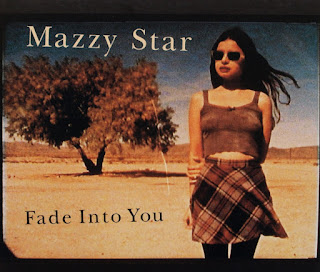 I can't recall if I ever slow-danced to this song, which means I probably didn't. It's doubtful that any school dance DJ's were cool enough to spin this track at the time. I do remember that the jock down the street used to add words to the title ("Faaade yeah-i'm into-youuu") Not sure if he was being sarcastic or if he honestly thought those were the lyrics. Also I played this song for my wife back when we were dating. She hated it.

When I was a tween I had this bad habit of assuming the name of the band was the name of the lead singer. This trend started with Jesus Jones and continued through Mazzy Star (not the singer's name, her name is Hope Sandoval) and Bush, because Gavin Rossdale was so prominent in the video (and because we'd just had a president named Bush.)

The lead singer of Jesus Jones is Mike Edwards, the same name of the man who married my last crush. "Fade Into You" is one of those songs that always makes me think of whomever it is that I'm thinking of at the time. I doubt that's why my wife dislikes it but it's notable.

Right now I'm in a weird-bad place with office girl. I avoid her as much as I can but it's not enough. I'm not ready to leave this job, and I certainly don't want her to be the reason I leave when I inevitably do so. I think my feelings for her have mostly dissipated, leaving only a residual jealousy that I'm not one of the cool young dudes that work up front and talk to her whenever they want without hesitation.

It's not a big deal, honestly. It'll pass. But I do miss the winter days when she and I got on a lot better.

Anyway. I hope you're all doing well. I'll check in again soon.

Thanks for reading & listening!

Email ThisBlogThis!Share to TwitterShare to FacebookShare to Pinterest
Labels: 1993 Playlist