The first time I heard Depeche Mode was sometime in 1990, when "Enjoy the Silence" and "Policy of Truth" were in regular rotation on MTV. I didn't really catch on to them until the end of the decade, after the grunge era had died out and I caught up on the "New Wave" acts I'd missed or vaguely remembered as a kid.

Depeche Mode released Songs of Faith and Devotion in March of 1993. The first single and first track off the album begins with a screeching sound reminiscent of Nirvana. Music critics have said that this album was influenced by the grunge era, but aside from the first eight seconds "I Feel You" sounds nothing like grunge:

Was this video in regular rotation on MTV? It's sexy enough that my 12 year old self should remember, but it's not as red-hot as Chris Issak's "Wicked Game" - which I definitely remember.

"I Feel You" was the highest-charting track off Songs of Faith and Devotion, reaching #37 on the Billboard 100. The only other single I recall was "Walking In My Shoes" which is also a great track. However "I Feel You" is the standout in my opinion, along with "In Your Room" and "Rush" - which might be the hardest track in the DM oeuvre:

Spirituality is a major theme of the album, which I always found interesting since frontman Dave Gahan was in full 'god' mode by 1993. 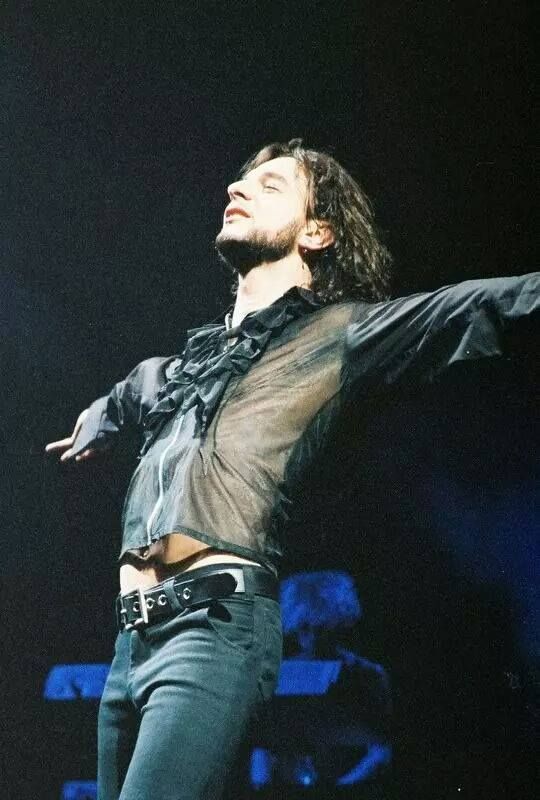 Throughout the 1990s Gahan had been battling a heroin addiction. He died in May of 1996

...for about two minutes before being revived. A year later, Depeche Mode released their ninth album Ultra.

The first single off Ultra was "It's No Good", which I heard for the first time on The Tonight Show(I thought it may have been SNL) I couldn't find the performance on YouTube but I recall being amazed at how different Dave Gahan looked and sounded. He'd cleaned himself up, sure, but his voice was less raspy and more .. joyful.

This was when I officially became a Depeche Mode fan. Before long I was adding their songs to mix tapes for my girlfriend, ordering retro posters for my bedroom wall (and taking another one for free once a record store was done promoting the Singles collection), going to see Depeche Mode play Madison Square Garden with my best friend - and not telling my next girlfriend because she'd planned to take me to see them in Philly and I wanted to go twice :P

Everyone but Jon: Do you have a favorite Depeche Mode song?