One can only wonder how long the Celtics would have contended for titles with these two stars leading them. Bias died of a drug overdose two days after the 1986 Draft. Lewis died of heart failure in July 1993. 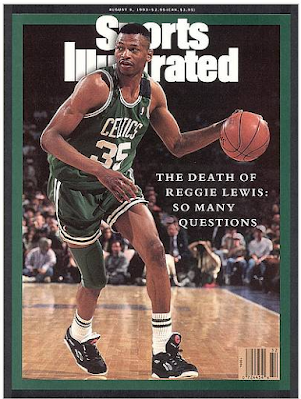 I was too young to remember Bias. I do remember that his death cast a long shadow over Lewis's. There was speculation that Lewis was using cocaine - as Bias had - but the official cause of death was a  pre-existing heart condition similar to that of Hank Gathers, the Loyola Marymount star who collapsed and died during the 1989-90 NCAA season.

Reggie Lewis was the Celtics' leading scorer in 1991-92, notably Larry Bird's final season. He averaged 20.8 points per game, made his first All-Star team, and led the C's to the playoffs. The torch was officially passed to him once Bird retired in 1992. In '92-93 Lewis was again Boston's leading scorer, averaging 20.8 points per game. Again Lewis led Boston to the playoffs.

He collapsed in Game 1 of the first round series against Charlotte, but returned to the court after the incident. For three months questions lingered as to whether Reggie Lewis would be able to continue his playing career. His uncertain status was mentioned during the 1993 Draft, though Boston selected a center - Acie Earl - in the first round.

It had already been a somber summer for the NBA in 1993 as New Jersey Nets star Drazen Petrovic perished in a car accident a month earlier. Both guards were in their prime, leading scorers on Eastern conference playoff teams. As a 12 year-old fan I was more aware of, and affected by, the loss of Lewis than "Petro". Perhaps it was because Lewis got more publicity as a homegrown product playing for a marquee franchise.

Perhaps it was because Lewis played in Boston and I was a New England kid. The uncertainty must have been a factor as well. Every new report brought a different prognosis: Reggie wasn't going to make it. Then he was going to live, but he would have to retire. Then it seemed like he could play again. 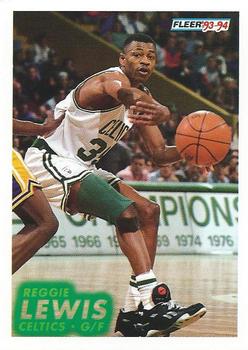 Then he was gone.

The Celtics had never missed the playoffs in three consecutive seasons before Reggie Lewis passed away. In his final season Boston won 48 games. The year after his death the Celtics won only 32, starting a streak of eight consecutive seasons with a sub-.500 record. From 1994 to 2001 the C's qualified for the postseason just once, losing in the first round to Orlando in 1995. Boston missed the playoffs in each of the next six seasons. 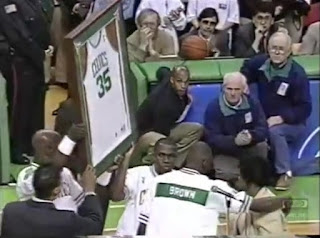 Do you remember the career (or death) of Reggie Lewis? Was there a pro athlete's death that affected you as a young fan?